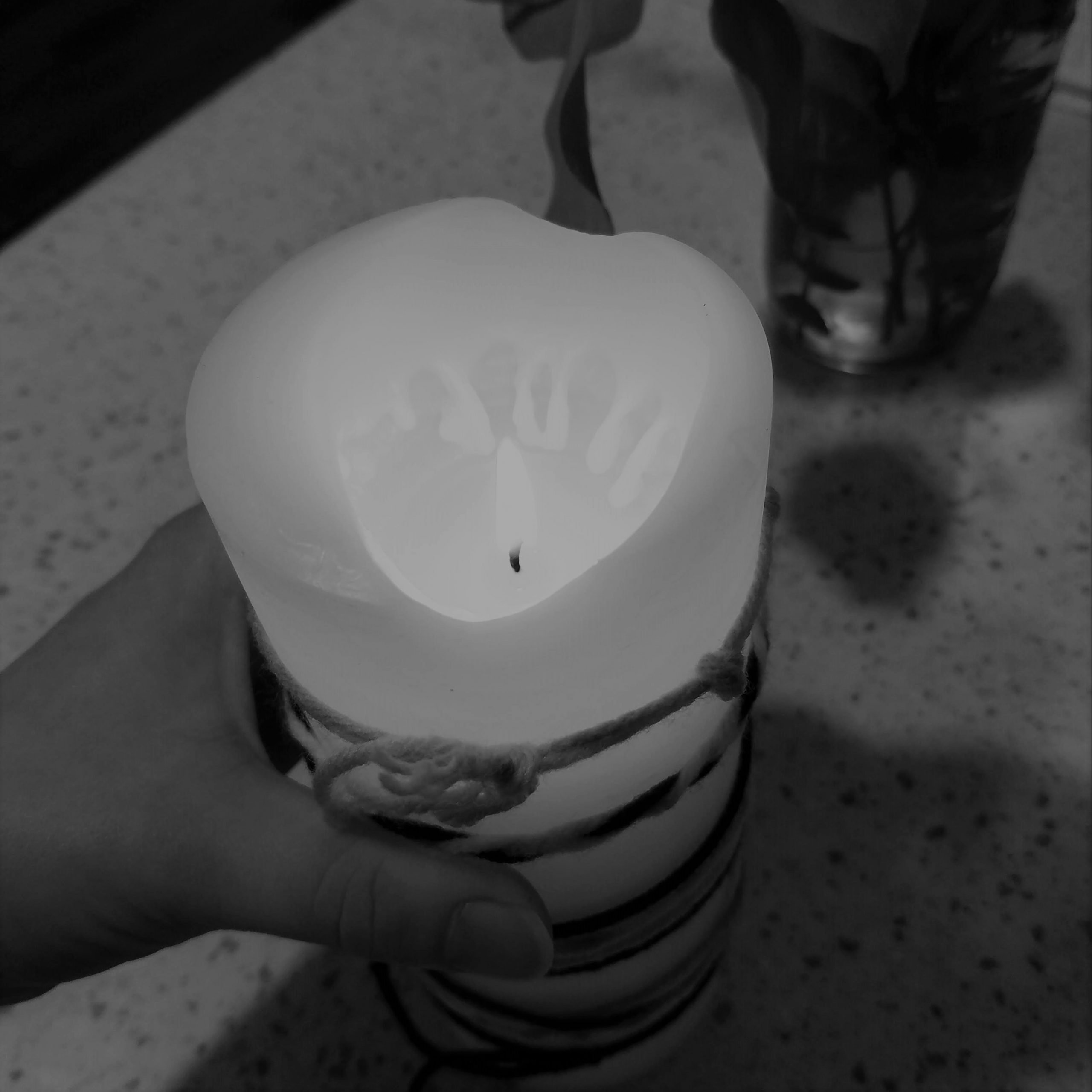 I felt the heaviness envelope me.

It carries its own brand of dreams and its own awakenings.

As I fed and cuddled my three-month-old in the dimness of the darkened bedroom, I sensed a grief settle down on my shoulders and work itself deep into my gut.

This mothering life connects women through time and space, across divides of decades and traditions.

And my sadness swelled for all the black mothers who have done this same service for their children, have taken part in this same ritual, this same dark morning givenness—and then seen the boys they held in their arms die 15, 20, 46 years later.

At the hands of mobs and the end of guns, over cries for mercy and under the knees of the merciless.

My heart mourns for these mothers. Who have brought life into the world and watched it be snuffed out by the breath of bias and bigotry.

But what we hold in our hearts will never make a change in the world, unless it finds feet and hands and voice.

If you had told me a year ago that harbored racist beliefs, I would have protested vehemently. I would have listed off my “non-racist” actions to convince you. Things like arguing with congregants who said I shouldn’t date a black man, or attempting to build friendships and mentorships with latinos and young black women in my neighborhood. I would have insisted that their skin color made no difference to me—after all, we are all created equally in the image of God.

But what I did not understand then is this:

You don’t have to blatantly spout racial slurs or refuse to share a table with a person of color to be a racist.

All you have to do is refuse to believe that you could potentially be part of the problem.

Those of us in the United States live in a nation that has always been under the curse of racism. We have white-washed our history (pun totally intended) to ignore the ugliness of our past. A past that belongs to us. A past that has shaped every facet of our society. A past that pushes itself into the present in insidious, silent ways.

As every family must wrestle and reckon with the past forces that fashion their present and their future, every nation must remember their roots. Including the roots we want to keep buried beneath the earth of passing time.

I don’t pretend to understand even a decent percentage of the evil that has formed our past and swirls through our present, invisible to those of us who have never had to look it in the eye. I am a beginner in this journey of self-education.

But a statement I read about a year ago stopped me in my tracks, and became the hinge on a door of consciousness. I wish I could remember who wrote it, so that I could extend the credit. What the person said boiled down to this:

If I am not willing to listen to, and trust the experiences of, my black sisters and brothers in Christ—who daily experience things my privilege has always protected me from—then who am I going to believe?

And furthermore…why would’t I believe them?

At that point, I began to pay attention. I began listening carefully to those in the Church who are black. I tuned in to those writing books and articles and detailing their personal experiences in a predominantly-white world. I pressed in to conversations among white people who had begun to examine their own privilege.

And I listened very carefully to my own inner protestations, my own internal self-defenses.

They were very loud, and very insistent, and very, very interested in self-preservation by maintaining the status quo.

But I kept listening, and learning, and getting frustrated, and trying to ignore what was slowly coming to the surface: my own prejudice.

I realized that racism isn’t merely made up of the n-word, or condoning hideous police brutality, or condemning interracial marriage.

It’s more subtle than that.

Racism is made up of quiet jokes about names and neighborhoods, of assumptions based on skin color, and complaints about “checking the minority box” in job application pools.

Racism’s built on the “Yes, buts” of well-meaning people who focus on results, not roots.

Racism’s formed of ignorance, as well as blatant prejudice.

And sometimes—maybe the majority of the time—the structures of racism are built on the silence of people who just don’t want to get involved.

I own my complicity in a systemic racism that is woven into the very fabric of our western world. I’ve been part of the problem.

And I realized, when I woke up to my role in this rule of evil, I should not even be surprised. Satan adores separation and segregation. To divide is to conquer.

To believe that the Enemy has not taken full advantage of the blindness, silence, and privilege of good white Christians would be a severe and foolish underestimation.

To believe that I was always right about how the world works (or am totally right, now) would be unreasonable.

And to assume that it’s okay for me to close my eyes at the expense of my black sisters who worry whether or not their black sons will come home from a run, or wonder if their black daughters will die in crossfire, is no longer an option for me.

But I can’t not write it. Because identity—what we talk about together, post after post, email after email—matters.

The identity of my black brothers and sisters as beloved, image-bearing human beings created by God is being regularly undermined and routinely disregarded in my state, my nation, and the world at large.

And not just through the death of innocent black people, but through the maintenance of a world where white people are automatically less suspect.

What do we know about identity in Christ, friends? We know that it is about the essence of a person, not their actions.

Identity is about Whose we are, not what we do or fail to do.

Identity is about the God who created us, who marked us with his own image, then said “Love your neighbor, and here’s how—be with them.”

Isn’t this the example Jesus offers us? He came to live with his people. He walked with his disciples. He spoke with the Samaritan woman. He sat with the sinners, and with the Pharisees. He, Emmanuel, dwells with us.

Have I, as a white woman in the United States, been with my black siblings in their grief, their pain, and their marginalization? I have not.

We in the Church wear our outrage like a badge when a racial lynching becomes national news, screaming at us from the headlines (or worse, pretend nothing has happened). But then we choose to believe that there are not hundreds, thousands, of other prejudice-based instances that don’t have the light shed on them. Ahmed Arbury and Breonna Taylor and George Floyd are the tip of an iceberg of injustices. If you disagree, give a listen to the internal arguments rising up within. They themselves can provide a trail of clues to follow.

I believe change begins at the ground level. Within our homes, our church buildings, our conversations, and our internet presences.

I want my children to seek first the Kingdom of God—whose King calls us to be peacemakers and to love our neighbors as ourselves. How can I teach them this if I pretend there is no peace to be made, or that all my neighbors are being loved well?

Guilt is not the goal, nor is shame the solution. But repentance reaps the hope of reconciliation, and love will always labor for the those whose voice the Enemy seeks to limit.

Embracing my own identity in Christ demands that I cherish the identity of all the Body.

And when one part of the body mourns, I must too.

Racism is not the only evil in our world, but for white people in the Church, it might be the most invisible. Because we think it’s not our problem.

Like the Covid_19 virus separating us from one another physically, racism is a silent strangler—and only part of the population carries the outward symptoms.

Our identity as image-bearers demands something different.

The Church is meant to function as a Body.

Our Black brethren are telling us that there’s an infection buried deep in our bones.

Let’s have ears to hear.

For my white friends who are unconvinced, or are distracted by the peripheral issues of politics and poor practices—I get it. I have gotten stuck on all the same issues, because I didn’t want to be a sucker for irresponsible news media, or because I thought racism was something that is always obvious, even to those of us who are not the recipients. To us, I simply say, “Let’s ask more questions.” Let’s question our comfortable beliefs. Let’s question what we base them on. If we are unconcerned, let’s ask why. Let’s question our conclusions in the light of Jesus’ statement, “By this will all men know that you are my disciples, if you have love one for another.” I’m still asking if people can see this in me, and hope I ask till the day I die.

For my white friends who have begun to recognize that racism isn’t limited to cross-burning sheet-wearers, but don’t know what to do next—keep listening. Listen to the black community. Listen to the Holy Spirit. Listen, and learn. And then talk to your white friends about what you’re beginning to see. Conversations help to change the world.